On Naked Buds That Are Actually Hairy Buds, or, Hey, Buddy 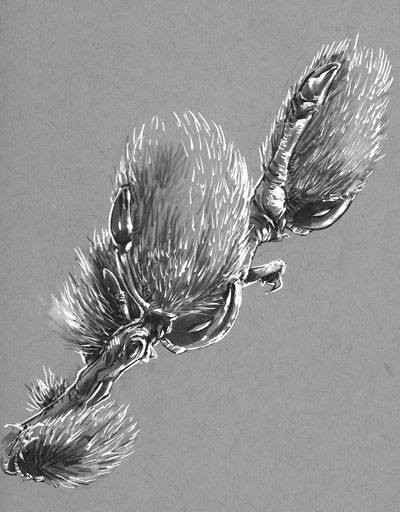 Military strategy and botany aren’t often considered in the same essay, but hey, sometimes it’s necessary to talk about defense.

The Greek phalanx is perhaps one of the best-known formations in military history, and not just because Gerard Butler drew attention to it with his astounding abs. The phalanx was a pain in the ass to penetrate: while Greek infantrymen—foot soldiers known as hoplites—stood in a tight cluster with their meter-long shields overlapping, they also stuck long spears through the gaps, daring anyone to come close and try to penetrate the dome of bronze and leather created by the shields. It wasn’t the easiest formation to maneuver through a battlefield, but it largely kept the hoplites safe.

Plants, in contrast, generally don’t have to worry about moving anywhere, unless we’re talking about seed dispersal or Ents. They do, however, have to deal with insects and other herbivores gnawing on them, especially on their tender green buds (which sounds a little more pornographic than it really is, sorry).

Woody plants have two types of buds along their branches: leaf buds, which produce the small, leafy shoots that we also know as twigs, and flower buds, which pretty much let you know via their name what they produce. In either case, the bud is a site of fresh new growth for the plant, which means that the bud is important to protect.

Plants aren’t animals, though (and if this blog teaches you nothing else, let that be it). There is no ability for a plant to go all Mama Bear on invading insects and simply swipe them away, as impressive as that would be. Most woody plants instead protect their buds with bud scales, modified leaves that hide the new green growth. Like the shields, or hoplons, of the Greek foot soldiers, the scales often overlap. They also have a leathery texture; the hoplons, made partly from wood, had leather fastenings that allowed soldiers to secure the shields against the entire length of their arms.Granted, buds lack the bronze embellishments of hoplons, but you know, details.

But not every plant’s buds are covered by scales. Some plants, like sumac and the peach tree, as well as other herbaceous plants (which are plants with leaves and stems that die back to the ground every year), have buds covered with tiny hairs. Because they lack scales, these buds are considered naked buds, which means that, yes, like your last date, plant buds can be both naked and hairy. Hey, buddy, indeed.

The hairs serve a similar purpose as the spears of the phalanx did: they keep attackers away. Specifically, they do an excellent job of preventing critters like caterpillars from munching on the bud tissue, which the hoplites never had to contend with, but the principle is close enough. In this way, the world’s flora demonstrates how adept it evolved to be at fending off onslaughts.

Nature: it’s a battleground. And war can get hairy.